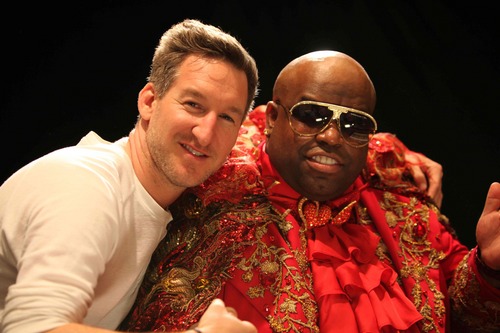 All eyes will soon be on Santa Monica born, Encino raised music video director Mazik Saevitz. Today Mazik meets me on a relaxed chocolate colored leather couch at Caffe Primo on Sunset Plaza.  His ensemble is crafted, and his polite demeanor exudes sophistication and confidence.  He is the creative guy’s Rain Man with voluminous cerebral folds.

With an overwhelming humbleness and professor like rhetoric, Mazik speaks on his feats and pursuits in music, film and fashion.

Before Mazik became the fashion entrepreneur and music video visionary he is today, he and his hip hop duo Blood of Abraham (comprised of Mazik and best friend Ben Mor) toured the hip hop circuit with Public Enemy, Black Eyed Peas (pre-Fergie) and mentor Eazy-E.  That was nearly 20 years ago.

Mazik & Ben of Blood Of Abraham – “Stabbed by The Steeple”

Today, Mazik visualizes and executes concepts for other musicians’ creative babies, directing videos for musical powerhouses, Will.I.Am, Cee-Lo and Matisyahu among others.

I sat down with Mazik to chat about his creative resurrection, his astounding ascent from skirting the law to touring stadiums, and his sensical evolution from hip hop artist to director.  He holds no degrees from either UCLA or USC Film School; in fact he holds no B.A. or M.A. degree at all.  Everything he knows today is from living life with a keen eye and a lush 360 degree perspective populated by doing nothing passively and by constantly saturating himself in all things cultural.

Mazik is a Los Angeles Native one ought to know.

E:  Hi Mazik.  This is where I get to ask you anything.  If you were to write your biography’s logline, what would it be?  What’s Mazik’s Wikipedia in a nutshell?

M:  My logline?  It would be something like:  Stemming from a music background / love for film / with fashion as a key component.  More of a director than a musician.

E:  More of a director than musician now?  Why is that?

M:  Well, I can use all the subgenres of everything I’ve done and insinuate it into my directing.  Fashion, music, etc.  It allows for a bigger platform.

E:  When and how did you get into fashion and how does that play into your directing?

M:  I came from very little money.  And as a kid, I was a big shoe person.  From years 8-16 I lived in Las Vegas with my mom and I’d come out to Encino to visit my grandmother.  I didn’t have any money to shop at GHQ which was the cool, high end retail shop at the time.  So, my grandma would buy me clothes at the GHQ outlet on Victory and Tampa and she’d buy me expensive stuff for cheap.  It made me cool because the rich kids didn’t even have those clothes.  I lived in an area in Vegas that was everything but Jewish.  It was all Black, Hispanics, Cubans.  There were alot of great DJs.  We’d all breakdance, make mixtapes, sell drugs to rich kids.  The fashion that developed was just part of that culture.

When I was 16, I headed back to LA and moved to Encino to live with my grandmother because I was getting into so much trouble.  I went to Birmingham High School; Ben won “Most Desirable”, but I got “Best Dressed”.  (laughs)

E:  Ben from Blood of Abraham?

E:  So let’s talk about Blood of Abraham.  I read somewhere that back in those days you were living with Eazy-E.  How did that come about?

M:  I met Eazy through this guy Epic who was in the band Crazy Town.  He’s a producer that’s done a bunch of stuff.  Prince, Bell Biv Devoe and so on.  We met Epic when Ben and I worked at this store in the mall called Cignal.  Epic came into the store and we rapped for him.  Right there in the middle of the store.  Anyways, long story short, he introduced us to Eazy.   During that time a bunch of labels were looking at us.  Chrysalis.  EMI.  Warner Bros.  Ruthless.  One night Eazy was hosting a gang truce night at Gazzarri’s. Wow, this was about 20 years ago.  Above The Law performed.  Will.I.Am’s band, the Atban Klann performed.  And Eazy wanted us to perform.  Ice Cube loved it and so he wanted us to meet Jerry Heller.

We ended up signing to Ruthless Records which was in Woodland Hills.  At that time, I was living with Epic who decided he was going to move from the valley to the city so I needed a place to live.  Heller handed me the keys to Eazy’s Calabasas mansion where I lived for a year and a half.  Dr. Dre lived down the street.  It was crazy.

E:  You guys were touring with some big people.  What led to your band’s demise?

M:  After Eazy died, Ben, Will(I.Am.) and I put together a studio.  We all taught ourselves how to produce.  [Will.I.Am. produced most of their last album (in the year 2000) which a journalist called hip hop’s OK COMPUTER.] During this time we also started composing music for young directors starting out that were fans of our group.  We scored commercials for Nike, MTV, Sprint.  We were always working under directors, conceptualizing, shot listing music videos and so on.  Then one time an artist asked me why I wasn’t directing.  In 2002, I realized I wanted to be a director.

E:  Which brings us to what you’re doing now. What leads to your creative visions and how do you overcome creative blocks?

M:  I look towards fashion.  I like the creative visions and sensitivities that fashion photographers capture.  I’m always buying tons of books so I always have a steady flow of inspirations.  I never find myself blocked.  Actually, maybe if I am trying to do something solely because I need the check – where there’s a concept without a net and I don’t understand why it exists in the first place.  Then I’m blocked.

E:  Who do you emulate and who do you oppose?

M: Jeunet who did Amelie and City of Lost Children because I love overall primitive sensitivities and fashion.  The visuals are stunning and Gaultier’s costumes are mesmerizing.  I love the way he married fashion with his film.

What do I despise?  I despise artists who don’t give us anything to think about.  I don’t watch television.  I only watch movies on television.

E:  What are you currently working on and what are some recent past projects?

M:  Some recent past ones are videos for Will.I.Am, Everlast, T.I., Mayor Hawthorne.  And I’m finishing up some effects on a Matisyahu video right now.

I also have a feature film production company called Opus Magnus.  So I’m in the works of pitching.

Also, in 2002, I started a sneaker store at Fred Segal – Santa Monica called Conveyor – so that’s always a part of my days too.

E:  I see your beautiful fiancé Amanda Reno sitting next to you.  Does she have veto power in your treatments, execution, editing?

M.  Absolutely.  Amanda is pop culture at its finest.  She knows what 12 year old kids like.  I do weird, quirky things — but then she makes me reel it in.  I’ve always been 10 years ahead and I need to be 5 years back to be relevant.  Amanda helps me with that.

E:  What would be on your tombstone?

M:  “Joyful participation in the sorrows of the world.” (Joseph Campbell)

E:  What do you wish I asked you but didn’t?

M:  What my ultimate goal is.  It would be to write, direct and score my own film.  A future biblical would be my concept.

E:  Mazik, thank you so much for all of this.  To finalize our interview, I’m going to ask you some light hearted, fun questions about your favorite childhood moments that we ask all our L.A. Natives.  So to begin:

M:  Being at Jerry’s Deli with all the Birmingham kids and running from the bill.

E:  Coolest famous person you met as a child?
M:  Bernie Casey, the actor from I’m Gonna Git You Sucka. My friend’s dad was his business manager.

E:  High School car?
M:  Foot.  Friends picked me up to go to school.  Later, I got a Volkswagen Quantum.

E:  What was on your mixed tape as a senior?

M:  Trendland.net.  I actually just wrote the guy an email thanking him for his website.  I haven’t heard back.  (laughs)

E:  What is the worst/best thing you ever read or heard about yourself?

M:  Worst:  “Hebrews of the New School” was used to describe Ben and me in Spin or Rolling Stone. I hated the whole Jewish hook.

E:  Thank you so much for hanging out.  We’re all looking forward to seeing what unfolds.

Be sure to catch Mazik’s latest Cee-Lo and Matisyahu videos which will soon be posted on Mazik’s vimeo site and here at The Daily Truffle.  Mazik is a refined renegade, a lyricist, a beats maker, an entrepreneur, a visionary director — and last but not least – the quintessential Los Angeles native that one ought to know.

Originally published on The Daily Truffle