Skip to content
Kaara is a writer and editor of creative and educational content and a mix master of the big picture and the details. Her happy place is marveling at the rhythm and texture of such disparate things as prairie plants, music, and the written word. Read the archives of her 2017 daily activism letter at TinyLetter.com/fiveminutes/archive; find her work at kaarakallen.com; celebrate nature with her at facebook.com/hearchicagotalk.

There’s been a lot of hating on 2017 these past few days, but it’s misplaced in my view. It’s 2016 that sucker punched us. What I saw in 2017 was the most incredible display of Getting Our Act Together I’ve ever seen. It started with the unprecedented worldwide 100% peaceful most-attended-ever march, conceived almost accidentally through a Facebook invitation and organized in record time. Around the same time was the proliferation of the plucky “alt” agencies on Twitter dedicated to publishing scientific realities. Remember when we were all Badlands National Park Service?

2017 continued with the rapid development of a suite of resistance groups dedicated to peaceful and democratic civic participation—Indivisible, Flippable, Sister District, Swing Left, Rise Stronger, and so many more—not to mention hundreds and hundreds of smaller local groups. These groups led the way in forcing accountability on current elected officials and reshaping the 2018 and 2020 landscapes entirely—a true grassroots revolution, and one that is making our democracy so much stronger.

There’s a high chance, even an inevitability, that grassroots movements will either fall apart or be co-opted by forces already in power.

But in 2017, anyway, that didn’t happen. Professional organizers did pick up at the point beginners found their energy and drive couldn’t take them. But these were people who’d spent their lives dreaming of whipping up even a whisper of what happened in 2017. People dedicated to peaceful and democratic change—not people dedicated to the status quo. And in addition, many of those beginners have seasoned into amazing new leaders and co-leaders. The DNC and other powerful forces have been forced—finally—to let the people lead. How many grassroots jumbles of people and ideas made this difficult transition to effective nationwide forces in 2017? Scores, I want to say. Scores! 2017 was incredible.

Emerging alongside these organizations were hundreds of call-to-action websites, letters, and Facebook groups, and hundreds of professional coalitions. One attorney friend of mine is in a group 150,000 lawyers strong dedicated to protecting the rights of immigrants and others targeted by Trump.

And finally, 2017 saw tens of thousands of progressive women and men sign up to seek elected office. Not all will run, not all who run will win, and not all who win will find satisfaction. But there is no denying the power of those numbers.

We had the advantage of surprise in 2017. And the advantage of being energized by the jolt to our system that is Trump. And we won’t have those advantages in coming years. We have other advantages, though, in our newfound infrastructure. Our growing expertise, and our populous base of engaged women and men.

Trump is not the problem. Trump is the symptom. Even when he is gone, the problems of ignorance and apathy could remain. And so could the desperation and alienation that so many Americans have felt for so long. The only solution is to bring our democracy back from the brink of failure by taking it back—by electing people (or even BEING those people) who will make policy that helps people, and by staying ever vigilant and involved as constituents and media consumers. 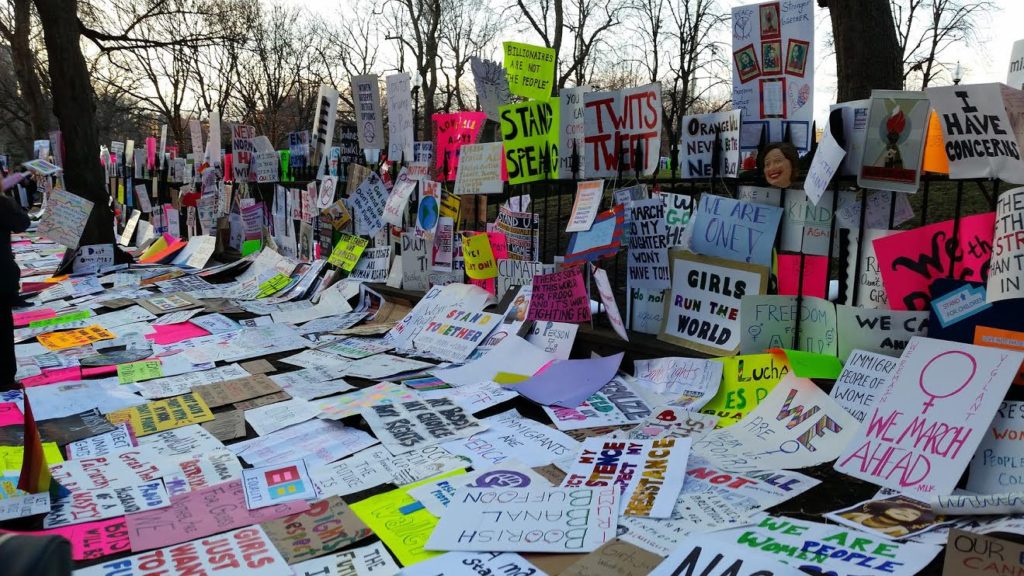 OUR NEXT 100 DAYS Saturday marked 100 days of the Trump presidency, and of the resistance. Also, it’s heartening to read the lists and thinkpieces detailing the triumphs of those of us who have been calling, marching, door-knocking, donating, and organizing, and interesting to compare where we are now to the first days of the resistance, and to Trump’s…

Let me tell you a story. I live in a deep-blue city surrounded by a lot of red (and some blue) districts. Democrats and progressive people — and even moderate Republicans — have resigned themselves to not being represented in some of these red districts. They might vote. However, the incumbents run unopposed or barely…

JANUARY 20, 2017 So. Today. It’s January 20, 2017. Strangely, I feel hopeful and energized. The dread I have been carrying around peaked on New Year’s Day—the month of the inauguration, the year of the first 100 days—and then, unexpectedly, began to recede. JANUARY 20, 2017 :: A TIME FOR HOPE AND FOCUSED ENERGY (BY…

We, the writers of this new column, are a collective committed to action, compassion, and self-care for the times. We call ourselves WE THE FREE, and twice a month we’ll post an interview, reflection piece, or action item. If you’re like us, the results of this election have you feeling like Alice tumbling through a rabbit hole.…