Doing what you love is like finding the holy grail, right?  It is undoubtedly a quest – but not one the Average Joe readily gets to achieve. There are more jaded lawyers, doctors, and business execs who dread getting out of bed than people who can say they get to pinch themselves for landing their dream job. Like Mike Bresnahan.

WHO IS MIKE BRESNAHAN?

MIKE BRESNAHAN  is the moment to moment, second to second documentarian for the world’s most famous basketball team. He is the L.A. LAKERS‘ beat writer for the Pulitzer Prize-winning LOS ANGELES TIMES — possibly one of the most sought after gigs for sports fans and journalists alike. He continues to flourish in this coveted seat — an unexpected seat for the oldest son of a cardiologist and nurse.

Here, Mike shows us his path and gives us his inspiring and guiding words on how he coalesced his hobbies, obsessions and skills into a thrilling and enviable career.  Mike goes on to detail how he became one of the reigning kings of sports journalism — and in turn, shows how everyone’s dreams are attainable.

Because his rise and achievements were driven by merit, his story reminds us that we can all aim high but skill and persistence yield rewards. Luck can play a part, but preparation for any opportunity is key. We learn how focus, drive, discipline and a passion for what you do are the real prerequisites.

Mike’s aspiration of becoming a sports reporter was rooted early.  Always a sports aficionado and dedicated athlete, he excelled in 3 sports (football, basketball and baseball!) at The Buckley School in Sherman Oaks.  After a solid football season as a junior (and after making All-Delphic League twice), he hoped to be recruited to play in college.

He soon learned his hopes were sadly misplaced. Not only was he vastly undersized for his position (only 175 pounds as a tight-end), but his team played eight-man football, which drew no attention from colleges.  He would not be getting his Blind Side moment.

“With my NFL hopes devastatingly dashed, I knew I liked sports and started writing about them for the Buckley student newspaper as a senior. I soon received my own column—“Bresnahan’s Blitz”—and discovered my career passion for life.”

In addition to his commitment to sports, he was equally devoted to working under the editor (and history teacher), Mr. Bruce Pollock at the student paper.

“This was where I first learned the ins and outs of journalism, including deadlines and the concept of getting a story edited (i.e. ripped up, turned upside down, etc.).  It was also crucial to take English classes from the always-informative Dr. Ellen Salas,” he tells us.

After Buckley, he enrolled at the University of Wisconsin where he became the sports writer for the student paper as a freshman and then later earned the sports editor slot as a sophomore. Over his final few years there, he proactively worked beyond the student paper, picking up freelance jobs initially for the Green Bay Press-Gazette and then later for the Milwaukee Journal. He helped cover University of Wisconsin sports for both papers, giving himself invaluable work experience writing for circulated publications despite still being a college student.

Upon graduating, Mike started with the L.A. Times as a freelancer for the San Fernando Valley edition. And now, he’s about to start his 12th season covering the Lakers for the Times! It would seem as though all of his cards lined up just perfectly.

What are the top 3 tips you would tell our future adults on how to achieve his/her dream job?  Does a higher education (college, etc.) play a crucial part – or do you emphasize real-life experience?

My favorite mantra while making my way through the career ranks was “polite perseverance.” Don’t be ridiculously pushy in trying to get to the top but don’t be a wallflower, either. When I started covering high-school sports for the L.A. Times as a freelancer, I realized the editor assigned games for the upcoming week with a round of calls at noon every Monday. So I started calling him at 11 a.m. on Mondays, and he started getting used to it, already having my assignments ready. I wasn’t calling him at home on Saturday afternoon or Sunday night, nor was I content just waiting for him to contact me Monday. So I chose polite perseverance, being aggressive without being obnoxious.

Real-life experience is so much more important than getting a ton of college degrees, in my opinion. I can’t ever remember would-be employers asking to see my college GPA. It was much more important for them to read the stories I wrote while in college. Sure, they wanted to see that piece of paper saying I graduated, but they were much more interested in my writing style, not to mention if I had any personality when meeting people face-to-face (including them!).

You’ll be okay financially. Just do what you like and do it well. Your first job or two probably won’t put you in a large house on a lush, secluded hill, but if you stick with something you enjoy and show some aptitude at it, you’ll be fine. Full disclosure: I don’t live on a lush, secluded hill but I no longer have the financial worries that tugged at me for years after college, when I was only a freelancer for the Times and working other jobs to make it all work.

How did you get involved with THE LAKERS?

It was kinda funny. My phone rang at about 7 a.m. on a random Tuesday or Wednesday. Anyone who works in sports media knows that late nights are part of the gig and early-morning phone calls are unusual. But it was someone claiming to be legendary L.A. Times sports editor Bill Dwyre, and he told me I was the new Lakers beat writer for the paper.

I thought it was a prank and almost hung up. I’m glad I didn’t. He was basically rewarding me for years of covering, in no particular order, high schools, colleges, the pro beach volleyball tour and the LA Kings. I was ecstatic.

For all the super fans around the world, how great is your job and exactly what does it entail on a day to day basis?  A day in the life of…

I’m lucky. I love what I do. The challenge of covering one of pro sports’ most successful franchises is exhilarating, whether the Lakers are winning championships (2009, 2010) or struggling mightily (the last few years). I have to be right down the middle in my coverage, ready to pat them on the back for a great victory or ridicule them for silly losses.

If the Lakers play a game that day, my job is pretty self-explanatory:

Write what I see, whether they win or lose that night. It’s also important to add entertaining and insightful quotes from interviews with players and coaches, and also conjure up a context to the story, perhaps by saying this was the franchise’s “worst loss of all time,” which was the case not too long ago in a game against the Clippers.

If there’s not a game that day, the Lakers will likely get together for a late-morning practice, either at their El Segundo training facility or whatever city their next road game takes place. The practices are closed to the media but players and coaches are available for interviews afterward. I have some freedom on days without games and can choose from a variety of options. Maybe I revisit what happened the previous night (How exactly did the Lakers give up a 20-point lead and lose?!).

Or I’ll look ahead to the next game, especially if, say, LeBron James is coming to town. Or maybe someone is playing really well and deserves a story all their own. Also, if someone has been playing below expectations, his struggles might need to be analyzed in depth.

It isn’t always easy to have stories due every day but there’s a rewarding rhythm to it for sure.

As a fan, employee, and journalist, what is the most rewarding part of your job?

Writing a great story on deadline is a really cool concept. Not every story is a Pulitzer, obviously, but I like the challenge of creating an informative and entertaining look at a game that just ended. Some of the Lakers’ home games have ended at 10:15, if not later, and the office wants my story by 10:30. It’s chaotic for sure, but also cool when hitting the Send button at 10:29. OK, maybe 10:31.

Your lifestyle must be rewarding, but exhausting.  Do you carry the exact same nomadic lifestyle as the players?  Here in LA when they are…then on a plane when they are?

Wherever the Lakers play, home or away, that’s where I am. I don’t travel on their luxury charter jet, and I rarely stay at the same hotel, but I’m at all their road games, be it Miami, Chicago or always-freezing Detroit in January (or so it seems with the Lakers’ schedule). Next year, I’ll surpass one million miles on United. I wonder if I’ll get a little on-board recognition like George Clooney did in “Up in the Air.”  (laughs)

Who is the most interesting Laker OFF the court?

The Lakers have had some characters over the years, including Shaq, Metta World Peace and Lamar Odom. More recently, Nick Young has been their most interesting player away from the court. His relationship with Iggy Azalea crosses him over into entertainment media, and he says and does goofy things. He’s got great quotes, sometimes to his detriment — after having a great game last fall, he compared himself favorably to some of the best NBA shooters of all time, which was fun to write about but led to plenty of rolled eyes from readers (and me too, to be honest). 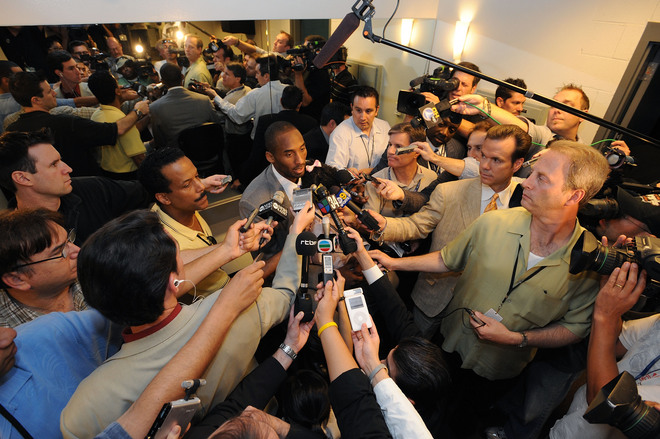 ++ What incredible and inspiring career advice, life guidance and insightful tidbits from one of the reigning kings of the sports journalism world.  Thank you, Mike Bresnahan and GO LAKERS!

Since the publication of this interview, Mike left the LA times (after 22 years) to become the ON-AIR LAKER ANALYST FOR TWC SPORTSNET!  Congrats to Mike!

You might also like, AN ALL AROUND TALENT- AN INTERVIEW WITH FROM HEAD TO TOE’S JEN CHAE, and HOW TO REINVENT YOURSELF IN THE CAREER WORLD :: AN INTERVIEW WITH HARVARD GRAD AND FORMER FACEBOOK EXECUTIVE, DEBRA BEDNAR-CLARK.