AN INTERVIEW WITH MARY MORELLO

MARY MORELLO has been an advocate for the movement against centuries-long systemic racism — and has been warring for peace, justice and equality since she was a young child born in the 20s. Her unwavering activism extended through the civil rights movement and her work with the NAACP – and has transcended all the way to today at the age of 98, as the mother of Kenyan American, Tom Morello.

The protests for equality and justice in today’s Black Lives Matter movement have been color agnostic this time around, but it wasn’t always like that. It was imperative for me to talk with her – a white woman from Illinois who has seen it all and who has been at the forefront of the civil rights parade for almost a century.

Mrs. Morello’s vantage point is interesting and differs from my interviews with Master Mason Williams and Kaara Kallen. Although Mrs. Morello says that we are nowhere we need to be yet, she has seen some progress. She articulates the difference between the climate experienced by herself and her son — and the world of her grandsons.

Morello tells us that the world is better, but we still have a long way to go.

Her son, Tom Morello, laid out her life’s timeline in an Instagram tribute on Mother’s Day.

“In the 1930’s she helped feed hobos during the Great Depression and supported the coal miners struggle to organize. In the 1940’s she helped raise war bonds to defeat the fascists in WWII. In the 1950’s she taught international students and opposed racist Jim Crow laws and as a single woman traveled the world. In the 1960’s she aided anti-colonial movements while living in Africa. In the 1970’s she was a radical teacher in a conservative high school inspiring students to challenge the system and aided the United Farm Workers and the Urban League. In the 1980’s she went on nine peace missions to the Soviet Union and Cuba and spoke out against Apartheid South Africa and Central American deathsquads. In the 1990’s she opposed the first Iraq War and founded an international organization to fight music censorship (Parents For Rock & Rap).

In the 2000’s she helped homeless people and recovering addicts get their highschool diplomas at the Salvation Army and opposed wars for oil. In the 2010’s she volunteered at local soup kitchen and currently works with Doctors Without Borders and Mideast peace and justice organizations. All the while being a loving, supportive single mom Mother Bear & grandmother…”

So it’s no wonder I have been feeling a profound need to expose her voice and gain invaluable and evergreen insight. 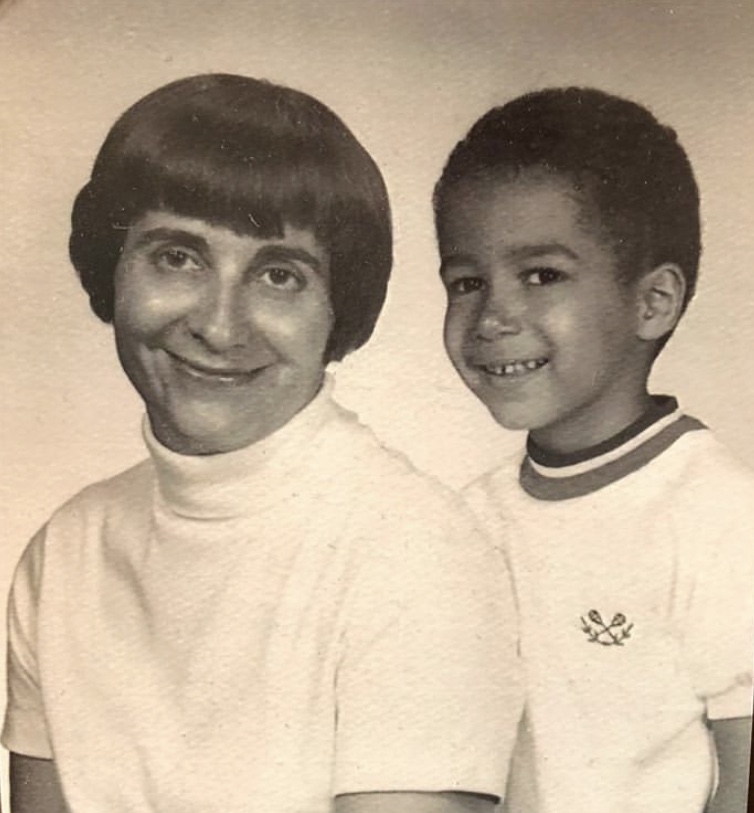 Mrs. Morello. Thank you so much for taking the time out to do this interview. It means a lot to me. I want to talk about the state of the world today – but first I’d love to go back and get words on your days early on as an activist.

I know you’ve been an activist since the civil rights movement and you worked with the NAACP. Can you speak on what you encountered raising a young Black boy in the Midwest and the adversity you encountered? I know you were teaching in Harlem….

[Tom’s father and] I moved to Harlem where Tom was born. And I was looking for a teaching job in New York City – but it was at a time they didn’t accept Tom.

My mom and dad came out for a month and they told us to come home – so we went home to a town of 5,000 where my dad was the bank director and we were perfectly at home there. There were little boys in the neighborhood that Tom grew up with and we were fine. No one cared what color we were – so I guess it depends on where you are.

But then I had to start looking for work since I couldn’t depend on my folks to support me. Most of the cities were in Northern Illinois, so I looked for places where I could teach history about other parts of the world.

It was interesting. The first place I went – my friend told me that in the United States, you have to tell people you have a black son. And during my first interview, I went up to a nice town in Northern Illinois and they said they would have hired me, but that I couldn’t live in this town and I’d have to live in the next town. That was stupid so I didn’t take that job.

So then I went to Libertyville.

Then Tom and I had to find a place to live and I knew people in the town. I went house to house and I wasn’t welcome. But, luckily, there were apartments built across from the high school and they had a man who was kind and we got an apartment.

We lived comfortably until it was sold. One day, there was a leak in Tom’s closet and I knew it was time for us to leave and get a house. So I went door to door and didn’t have success.

But, I had talked to a senior who went to Wisconsin and Northwestern and he had married a girl from one of the Islands and his mother sold real estate in Libertyville. She ended up finding our house. And we still own that home today and my grandsons go visit and have a great time. 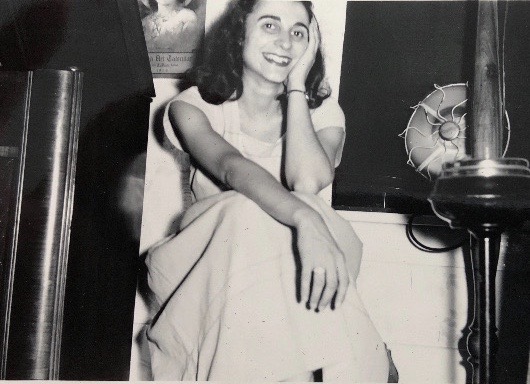 During this time, it sounds like you are forced to go along with the system and their prejudice. So at what point, are you protesting the system?

Forever! I was the greatest protestor in the world since the time I was little. Anywhere I was, I joined groups – Black groups – and no one minded me coming because I was sincere. Wherever I was, New York City, Chicago, I always joined Black Groups.

We had marched, petitioned, wrote letters to the editor. We did lots of things. My family raised us – my mom was Irish and German and my dad was Italian – but they raised us to believe everyone was the same so we never thought differently.

We had kids his age in the neighborhood and they would always come over.

My dad was really respected since he was the bank director – and he did lots of things and played golf with lots of people so they just accepted us without question. Tom was my dad’s grandchild and the neighbor kids didn’t mind that he was black.

[Toms speaks in the background]

Well, there was a noose in our garage. And there was also more covert racism in Libertyville.

As the mother of a son – there are only so many measures you can take standing up for equity, equality and inclusion while making sure you didn’t put Tom or yourself in danger. How did you juggle?

He would get antagonized by this kid on the schoolyard during recess. But his best friend, Andy, would stand up for him. He always had a good friend who didn’t care whether he was the same color or not. He always had someone to back him up.

After the noose, it just made me angry at everything. I knew there were clans people around. Someone put a noose and clan literature on my bulletin board at school. We had a black teacher and she had the same thing [happen to her].

Because only a couple of people were friendly, I didn’t eat lunch at school. I just went home and ate lunch there. It didn’t matter. I had a job and Tom was at an excellent school.

I sent Tom to a Catholic school where he also received his First Communion — but then found out the nun teacher had separated Tom from the other kids. And we found out a Mexican kid was also separated. I got a letter from the priest in charge who wanted a meeting. Tom and I always went to Mass with my parents since they were great Catholics – but after this, my faith went out the window.

Not all racists are insidious racists and overt racists, the type that puts the noose on the bulletin board. Obviously today there is covert racism still. Would you say there has been progress – but not enough progress? And how do you spot it, vocalize, react to it?

Tom has to be in Los Angeles since he is an artist and I’m not sure if he meets any racism. And we live in a luxury home and the kids go to a wonderful school with the sons and daughters of diplomats and others like that. My grandkids haven’t suffered prejudice from anyone. They’re with like-minded diplomats who are often people of color. The school accepts a lot of people and takes some people from the poor area and brings them to school.

And I find I’m in the same situation with my children. We’re with like-minded people at a progressive school in Los Angeles so there isn’t overt racism. And that leaves us naively shocked when we go out to the greater pool of the world and hit with reality.

My grandkids have never met prejudice and I sort of wish they had because somewhere they are going to meet it.

How do you educate them now? Historically – do they understand their predecessors?

The oldest one now is taking a 3-day class on prejudice but no one has been prejudiced against them.

Tom met prejudice, of course. But he could handle it.

Where do you think we are as a nation today?

We need to have some kind of socialism so there aren’t people on the streets and no one is hungry. There are tons of homeless people.

Are there answers? What can people like us, those in a somewhat favorable position, do? How can we fight for justice and equality and the underdogs? Thank goodness we have people like Tom who have a platform. We need Black people and people of color in executive positions and positions of power.

Well, there are people, I think, who are prejudiced against color and won’t have anything to do with people of color. I’ve always been seen as Black because of Tom and I’ve been happy to be Black. But we’re just people. It’s just stupid.

I am very pro-people. I was a communist for a long time, I still am.

What would you do at the government level?

I don’t think the people of this country would vote for anyone who would change it. That’s how  I feel. People are in their own views and very negative, racially, and I educate people who are for Trump.

I’m lucky I grew up with a grandfather who was way left. And my dad was always way left.

I remember one thing Tom told me when I asked him why he wasn’t running for a political office. He told me that any sort of big change and revolution happens at the grassroots level. That has always given me hope.

Mrs. Morello, thank you so much for doing this interview. You are amazing and have done so much to help our world.

Thank you for talking to me. I’m here to answer any questions.

To millions, he’s Rage Against The Machine’s (and Audioslave’s) Harvard educated, Grammy Award winning rock n’ roll God on a powerful social activist mission.  To others, he’s the founder of one of the greatest hip hop rock duos, Street Sweeper Social Club.  Also, to his alter-ego, he’s The Nightwatchman.  And to two, Tom Morello is simply daddy. TOM MORELLO comes from…